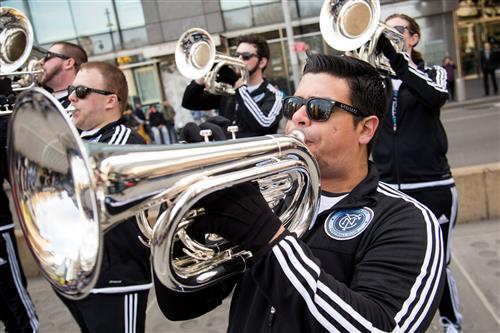 Mark Figueroa graduated from West Chester University of Pennsylvania in 2008 with a degree in Music Education (Euphonium Concentration). During his years at West Chester, he both performed in and taught the WCU Incomparable Golden Rams Marching Band. During this time, he also spent his summers as a marching performer in the Crossmen Drum and Bugle Corps.

Since graduating, Mr. Figueroa has spent time teaching at every grade level. This perspective has given him a lot of insight into how to best bring out each student's strengths in their playing. He is excited to get to work with Muhlenberg's beginning band members, and set them up for success in their playing careers!

Mark happily resides in Breinigsville, PA with his wife Allison, who is also a music teacher!

Mr. Figueroa performed in the studio with the artist LL Cool J!

He can also be heard playing mellophone and euphonium in Janina Gavankar's cover of "Don't Look Down" by Martin Garix. He is also in the music video! Link below!