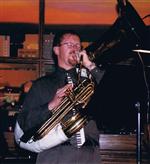 30+ credits from University of the Arts at Villanova University

Plays Tuba and Bass Trombone in various music groups including: Basic'ly Brass!, Hesse's Nasty 9, The Reading Pops Orchestra, The Lancaster British Brass Band, Hesse's Hot 3 and anyone else who will call!